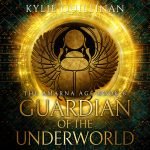 Title: Guardian of the Underworld

Having released Egypt from Ay’s clutches, Ankhesenamun returns to Crete to try to retrieve Intef from the underworld. But a deal struck with a god, even a minor one like a gate guardian, cannot easily be undone.

Once again Ankhesenamun will be tested. Once again she will have to decide just how much she’s willing to give up to achieve her aim.

This is the final instalment in The Amarna Age series.