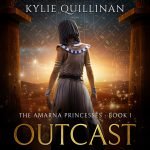 From the author of Queen of Egypt comes a new fantasy adventure set in Ancient Egypt.

Tey always knew she was different. She didn’t grow up wanting the same things as the other girls. Her father has surreptitiously trained her as a soldier and she has waited for an opportunity to use her illicit skills.

When the queen’s younger sisters need to be sent away from Akhetaten, Tey volunteers to go with them. She will leave behind both her home and her life to shepherd the two girls to safety and protect them for the rest of their lives.

Pharaoh’s advisors would rather the girls were killed to eliminate any potential competition for the queen’s throne. Once they realise the girls have fled, they will send men in pursuit.

But Tey gets more than she bargained for. One of the sisters is too young to understand why she must be sent away. She doesn’t want to go and she has a powerful magic that will endanger them all.