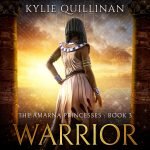 The Catalyst has awoken and danger is closer than ever before.

Reunited at last with Hennie and the girls, Tey discovers all three are changed from when she last saw them.

As their pursuers catch up to them yet again, Tey begins to wonder whether one of those she travels with has betrayed them. It is only when she learns the Catalyst’s identity that she will understand the truth.

For readers of historical fantasy who enjoy an ancient world setting and a background of 18th Dynasty Egypt.