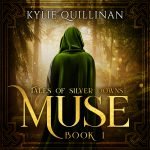 Narrator: Anya (This is an AI narrated audiobook and is exclusive to Google Play)

A bard with an ability he doesn’t understand. A wise woman with power she never wanted. Each has a quest and they’ll need each other to succeed.

Diarmuid is not a typical bard. His tales aren’t about hope and heroism, but instead reflect the darkness he feels inside. When he inadvertently brings his imaginary muse to life, everything she knows comes from Diarmuid’s melancholic tales. Desiring her own life, she leaves Diarmuid and sets out to live in the only way she knows how.

Brigit tries to be a good wise woman like her mother, but feels like she’s wasting her life dispensing charms and cures. She spends her days longing for danger and adventure. When she encounters a fey and becomes the victim of a cruel curse, she gets more adventure than she ever wanted.

As the pair cross paths, they soon realise that the only way to succeed in their quests is to join forces. Together, they discover the true nature of Diarmuid’s bond with his muse. While the world will never be safe with her loose in it, destroying her could have fatal consequences…

Muse is the first book in a series of dark fantasy novels set in pre-Roman Britain. For readers who like lush historical backdrops with a fairytale feeling, a fantasy quest and characters who fight their destiny.

She knows she's going to kill the man she loves. She just doesn't know why yet.

A bard with an ability he doesn't understand. A wise woman with power she never wanted. Each has a quest and they'll need each other to succeed.