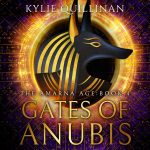 The Eye of Horus is almost within Ankhesenamun’s grasp. She now knows it definitely exists and she even knows where it was hidden just a few years ago. But when she reaches her destination, what awaits her there is nothing like she had expected.

She was warned the gods wouldn’t allow the Eye to be easily found. She was told she might crave its power for herself. She didn’t take either warning seriously enough.

Ankhesenamun will be tested until she breaks and only then will the gods decide whether she is permitted to wield the Eye. But even if they decide she is worthy, will the price be more than she can pay?