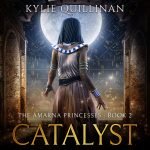 They thought they had found a safe place to call home. They were wrong.

The men sent by Pharaoh’s advisors have found them. Tey, Hennie and the girls must leave their new lives and flee once again.

But Tey learns that despite her training and her skills, she alone cannot keep the girls safe.

For readers of historical fantasy who enjoy an ancient world setting and a background of 18th Dynasty Egypt.